Students from MIT hosted at Unisannio 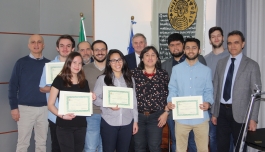 Followed by Unisannio teachers as supervisor, they carryed out specific projects on issues at the cutting edge of the state of the art at an international level in the field of engineering and economics.

The 30th  of January they received the certficate of attendance during an event which was attended by the rector Filippo de Rossi, the coordinator of the MIT Student Exchange Program for the University of Sannio, Silvia Liberata Ullo and the Unisannio supervisors that followed the projects of the Amerian students, Innocenzo Pinto, Domenico Scalera and Maurizio Sasso

The MIT students' reception program at the University of Sannio intended to promote scientific collaborations between the Italian supervisors and the academic and research advisors of the American students involved in each project. The idea for the future is also to activate an exchange of students from the University of Sannio to MIT to carry out similar internships at the prestigious US university.The MIT students involved are: Wendy Trattner, graduate in Physics and Bio-Engineering, who were followed by the professor Innocenzo Pinto and his group, with Vincenzo Galdi, Vincenzo Pierro, Giuseppe Castaldi, and Maria Principe, for the project on the "Study of Functioning of the mirrors realized within the LIGO project,  at the base of the discovery of gravitational waves "; Benjamin Rodriguez, graduating in Mechanical Engineering and Computer Science, who was followed by professor Luigi Glielmo, with Luigi Iannelli, Giuseppe Silano, Davide Liuzza, for the project on "How to integrate the Crazyflie nano-quadricopter  within the Gazebo framework useful to simulate virtual reality environments "; Spencer Pantoja, graduating in Economics, followed by professors Domenico Scalera and Annamaria Nifo, with Roberto Virzo for the project "Study of dynamics that lead large companies to choose an Italian region for an industrial settlement, investigating the impact of environmental parameters and regional laws "; Ahmad Mujtaba Jebran, graduating  in Mechanical Engineering and Nuclear Science, followed by professor Maurizio Sasso, with Carlo Roselli, Elisa Marrasso and the people of the Laboratory of Technical Physics for the project "Study of a micro-cogenerator of energy,  available in the laboratories of Technical Physics , for the evaluation of performances during normal operating conditions, and comparison with those simulated by the software TRNSYS 17 "; and Trang Luu, graduating in Mechanical Engineering, followed by professor Ciro Visone, with Leone Damiano, Carmine Stefano Clemente, Valerio Apicella for the project "Experimental magneto-restrictive characterization for the realization of innovative sensors based on samples of Galphenol (a special alloy of iron-gallium) ".

The reception of American students was supported by the association ESN Maleventum that helps foreign students to integrate into the new university and city reality.