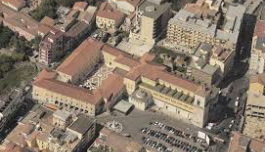 Unisannio is highly integrated with the city, with sites distributed in different areas of the city

The University of Sannio is a city university, immersed in the beautiful city of Benevento whose offices are distributed in different areas of the city.

Benevento, main town of the province of the same name, is located in the Apennine hinterland of Campania, in the southern part of the Sannio.

The city, located in a valley, is crossed by the Calore and Sabato rivers; to the west of the city there are the peaks of the Taburno-Camposauro massif, the Dormiente del Sannio, to the east, the slopes of the Dauni mountains, to the north-west, Monte Mutria and Matese, and to the south the Partenio. The city was first called Maleventum, then Beneventum and finally Benevento.

Benevento was first a Samnite, then Roman, later Lombard and finally pontifical city and therefore boasts a significant historical-artistic heritage and a notable archaeological heritage.

The city, according to the legend, was founded by the Greek Diomede, after the destruction and fire of Troy. The foundation, in reality, seems to have taken place by the Osci and the city would then pass to the Samnites. Ceramics and bronzes of the eighth and seventh centuries are the testimonies of the pre-Roman period of the city. After a long resistance, the Samnites finally surrendered to the Romans in 268 BC. who renamed it Beneventum.

Some important Roman monuments, such as the Arch of Trajan and the Leproso Bridge, still enrich and embellish the city today.

During the Middle Ages, Benevento was conquered first by the Goths, then by the Byzantines and, in 571, by the Lombards, whose domination lasted until 1077, the year in which the city passed under papal rule. During the eighteenth century it was first a possession of Ferdinand IV of Bourbon and, subsequently, it was part of the Neapolitan Republic. In 1806 it was under the rule of Napoleon and in 1860 it was annexed to the Kingdom of Italy.

The Arch of Trajan is one of the most important monuments of the city; it was built in 114 at the behest of the senate and the Roman people to commemorate the optimus princeps and was finished in 117.

Another testimony of the Roman period of the city is the Leproso Bridge, located on the river Sabato, connected the Via Appia to the city. Today only four arches have survived.

The Roman Theater, built by Hadrian in 126, was subsequently enlarged by Caracalla between 200 and 210. It has a diameter of 90 meters with a capacity of 10,000 spectators. Today the scene, the cavea and part of the three orders of arches are still preserved.

The Church of Santa Sofia, testimony of Lombard architecture and dated around 760, is one of the most important churches in Langobardia Minor; presents a particular star plant and, together with other works of Lombard origin, is part of the serial site Italia Langobardorum, center of power and worship, and has been registered on the UNESCO World Heritage List since June 2011.

The castle of Benevento, known by the name of Rocca dei Rettore, stands in the highest place in the whole city. The hill on which the Rocca stands was already used by the Samnites and the Romans who built a thermal building there, called Castellum aquae; subsequently, the Benedictines established a monastery there. The structure consists of two distinct bodies: the Torrione, built by the Lombards around 871, and the Palazzo del Governatori built by Pope John XII in 1321 to give a seat to its governors, the Rectors.

The Cathedral of Benevento was the first Christian temple erected in the city, the oldest foundation dates back to the early 7th century. It was then enlarged in the 12th century, when the facade was built, in Pisan Romanesque style, with the bronze door, called the Janua Major; the Gothic bell tower was built in 1279. The Cathedral was further embellished in the 18th century, but during the Allied bombings of 1943 it was almost completely destroyed and was rebuilt, after the war, with five naves.

In the medieval period, the Hortus conclusus was the vegetable garden inside the convent of the Dominican Fathers, today it is the seat, since 1992, of the installation of artist Mimmo Paladino, one of the most important exponents of the Transavantgarde. The Hortus opens at the end of Vico Noce, accessible from Corso Garibaldi. The most significant object of the installation is the bronze horse: placed on one of the surrounding walls, it wears a gold mask similar to that of Agamemnon.

ARCOS, Sannio Contemporary Art Museum, inaugurated on 25 June 2005, is located in the basement of the Government Palace; in addition to housing a permanent exhibition, it often hosts thematic exhibitions.